Back to COVID-19 Discussions

The best way to deal with a virus like COVID-19 is to make a vaccine against it. Nonetheless, until a vaccine becomes available, you and your child can become actively engaged in stopping COVID-19 through using science and prevention. Every child and adult can help in the fight against COVID-19 by avoiding infection in the first place and NOT spreading it to anyone else. This is prevention. In this LabLearner Discussion, your child will learn about steps they can take to stop the spread of the virus by covering their face when they cough or sneeze.

The best way to deal with a virus like COVID-19 is to make a vaccine against it. This is exactly what thousands of scientists are trying to do. Once available, we can vaccinate people and even if they are attacked by COVID-19, the vaccine will stop the virus from making them sick. However, until that time we must rely on two other approaches.

First, we can come up with a treatment. A treatment is a procedure or medication that lessens the severity of the COVID-19 infection so that it does a minimal amount of damage once we are infected. There are a number of potential drugs that are being tested at the moment, some more promising than others. Nonetheless, we have to rely on the researchers to develop scientifically-sound treatment and pharmaceuticals and physicians to work with their patients. But what can we do besides listen to our doctor and cheer the scientists on?

The second approach we must take at this time is prevention. We should guide our children to become actively engaged in stopping COVID-19 through using science and prevention. Every child and adult can help in the fight against COVID-19 by avoiding infection in the first place and NOT spreading it to anyone else. This is prevention.

We want to stress to our students that the best tool we have against COVID-19 is science. This is the first of three slides that depict people who are fighting the virus right now. The illustration in this slide shows doctors and nurses. However, there are a whole host of other medical professionals involved in the fight including first responders (police, firemen, ambulance drivers, and others). Technicians, nurse’s aides, hospital maintenance workers, and others are also risking their own health to fight COVID-19. Our students can learn to respect these people.

This slide features a scientist “working against the clock” to find treatments and cures. The slide asks the question, “What school subjects are important for science?” Obviously, science and mathematics are essential. However, reading and writing are fundamental. Without solid literacy one would have extreme difficultly learning anything else. Physical education is also very important to stay fit and healthy.

Children should begin to understand that, by working hard at school, they may well become one of the medical or scientific professionals that are engaged in the fight for human health when they grow up.

This slide builds on the previous two. We discussed how medical personnel and scientists fight COVID-19. This slide accentuates the idea that all of us can join the fight! At this point, in the middle of a pandemic caused by a new virus, prevention is among the most important ways to join the fight and defeat the virus. When we don’t get sick, or when we do things to prevent others from getting sick, we are directly helping medical professionals and first responders by reducing the number of patients entering hospitals. This allows doctors and nurses to spend more time on each person in their care.

Children, like everyone else, feel better when they believe that they are doing something useful to help in a bad situation. Becoming actively engaged in an effort helps make things less scary as it removes the disquieting feeling of helplessness. Millions of children will recall the COVID-19 experience. It will impact their lives in many different ways. Learning to pitch in and help and care about others are wonderful lessons for them to take away from this unfortunate pandemic. Who knows how many future doctors, immunologists, biochemists, public health officials, and other professionals are being recruited right now among our children as a result of COVID-19!

This slide illustrates one of the most common ways by which a virus is spread from an infected person – sneezing and coughing. Students have almost certainly been told to “cover their face” when they cough or sneeze. This is because the mist and droplets expelled during a cough and particularly a sneeze can be loaded with viruses and be projected into the air that another individual might inhale. In this LabLearner Discussion, students will begin to consider the distance that viruses can travel in a sneeze or cough.

It is essential that students conclude, through discussions with them, that sneezing or coughing into one’s hand is not as safe as into the inside of their bent arm or into a tissue that is subsequently discarded appropriately. This is because, once on our hands, the virus can be transferred to others through direct touching (handshaking, for example) or handling items that others may touch and become infected.

Now that we have discussed that coughs and sneezes can travel quite a distance, this slide introduces the concept of social distancing. Ask, “Which child is more likely to be infected by the sneeze?” The answer is obvious, and it is one of the reasons that, during pandemics and even seasonal flues, keeping a safe distance from others outside the house is important. This slide also asks, “What could this boy do to protect his friends?” At this point, students should hopefully say something about covering his mouth or perhaps that the boy should have stayed at home if he is sick.

This slide basically reviews what students have learned so far about coughing and sneezing. Ask them if the woman in each of the four examples is sneezing the right way or the wrong way. Equally important is to include in your discussion the reason(s) for students’ answers in each case.

Even though, in the first two examples (from left), the woman tries to contain her sneeze, she does so by covering her mouth and nose with her hands. Ask your child, “What is wrong with the woman sneezing into her hands?” Students hopefully will have at least two answers. First, germs are now on her hands and she might touch others or an object that others may subsequently touch, thus spreading her germs to them. Second, the woman may forget she sneezed and touch her eyes or face and re-infect herself.

The two examples on the right of this slide depict acceptable ways to cover a cough or sneeze. However, the tissue paper approach has a serious drawback in that coming in contact with the dirty tissue can spread the germs. Thus, leaving used tissue on a table or in a pocket, only to be touched by someone else later, may easily result in the spreading of germs. This is one reason that the old-fashioned cloth handkerchiefs were so unhealthy (and gross)! A wastebasket full of discarded infected tissues is a health risk for little brothers and sisters who may touch the contents or an adult who must empty it. Flushing a used tissue is an effective way to dispose of a used tissue.

Finally, students should discuss that sneezing into the inside of the woman’s elbow is the best of the four choices in this slide. Show students how you sneeze into your own arm and have them practice several times. Keep an eye on them and correct or praise them when they really do sneeze or cough! 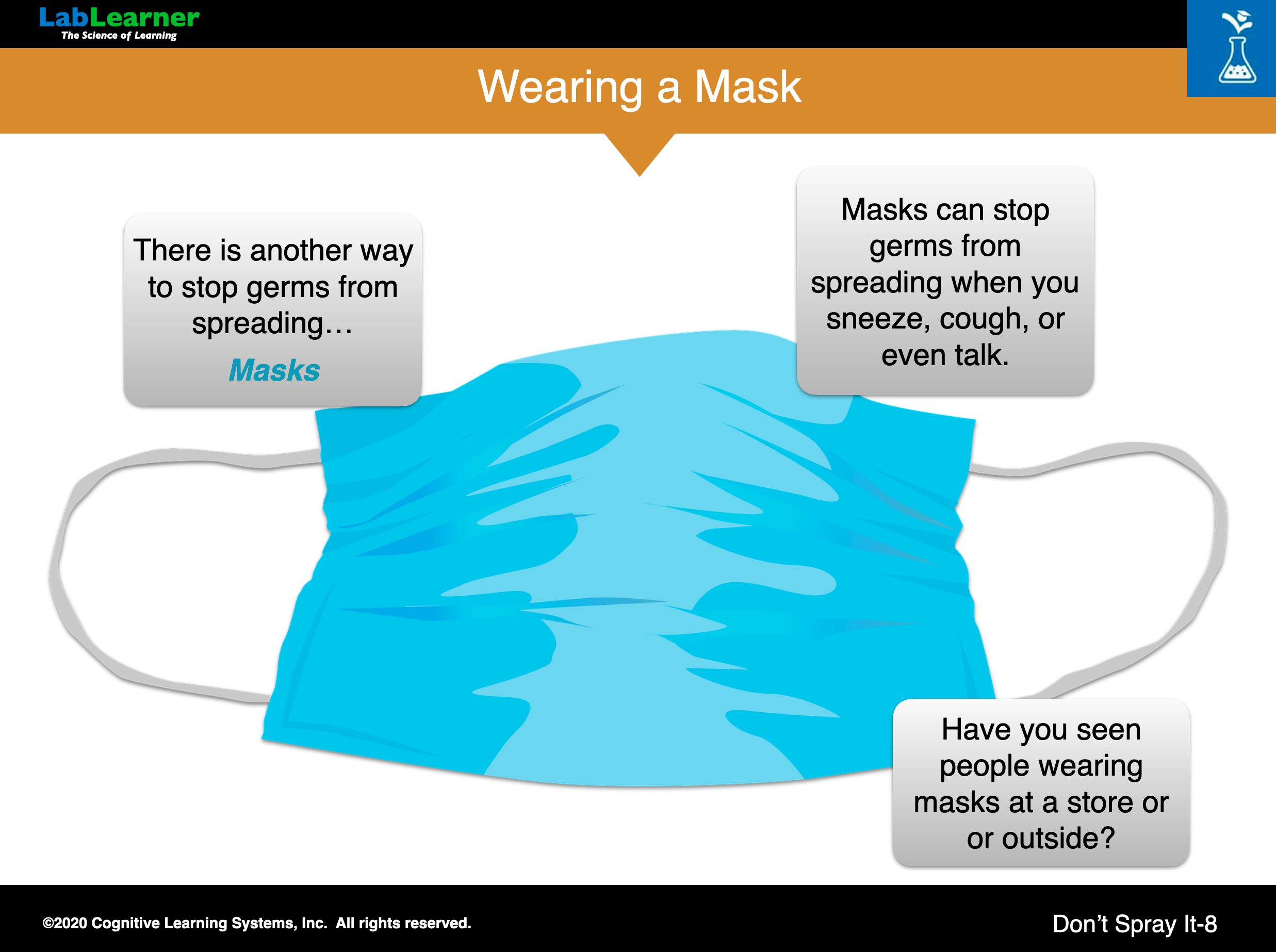 This slide begins a four-slide discussion about masks. The challenge for educators and parents at this point is to educate students about masks as a means of mitigating COVID-19 spread, while not senselessly frightening them.

One way to accomplish this is to accentuate that grownups use face masks not out of fear, but to be in control of the situation. Important people like scientists, doctors, nurses, other medical personnel, first responders, and many others ware face masks as a normal part of their jobs. 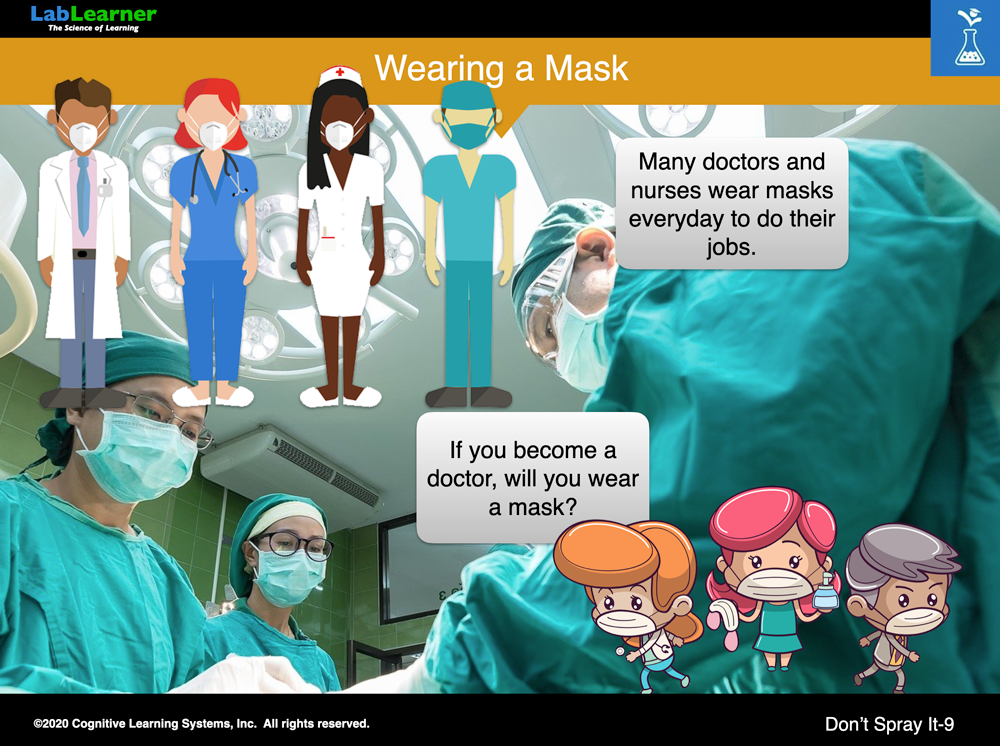 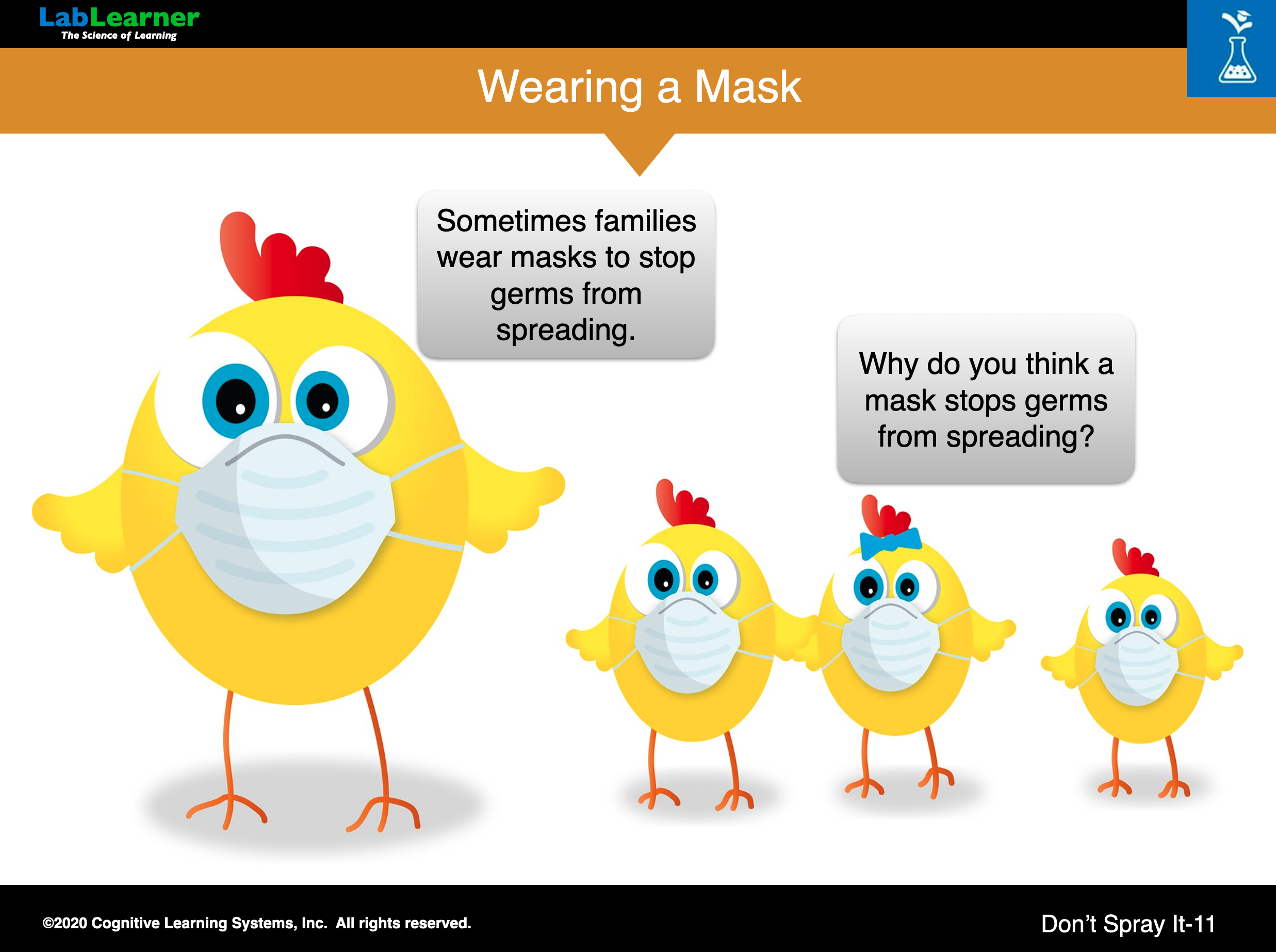 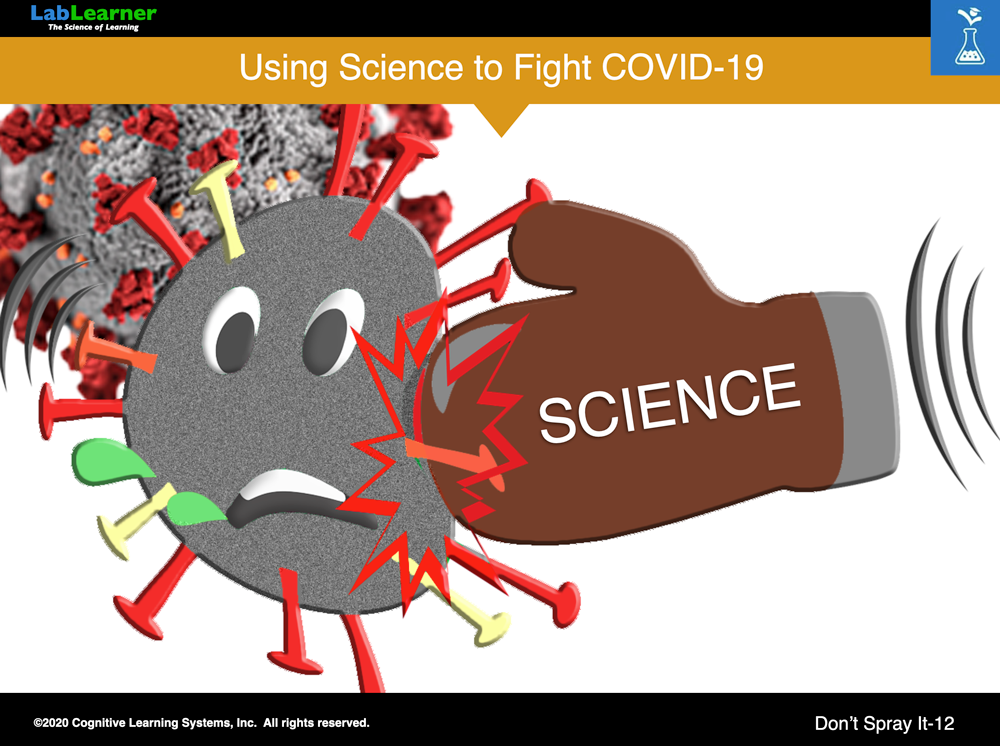 This final slide shows a cartoon in which we see that science beats the virus. Also, reiterate to your child that the subjects they currently study in school, including science and mathematics, can be used to fight germs and may someday even help them become doctors, scientists, or other adults that work to help other people stay safe and healthy.